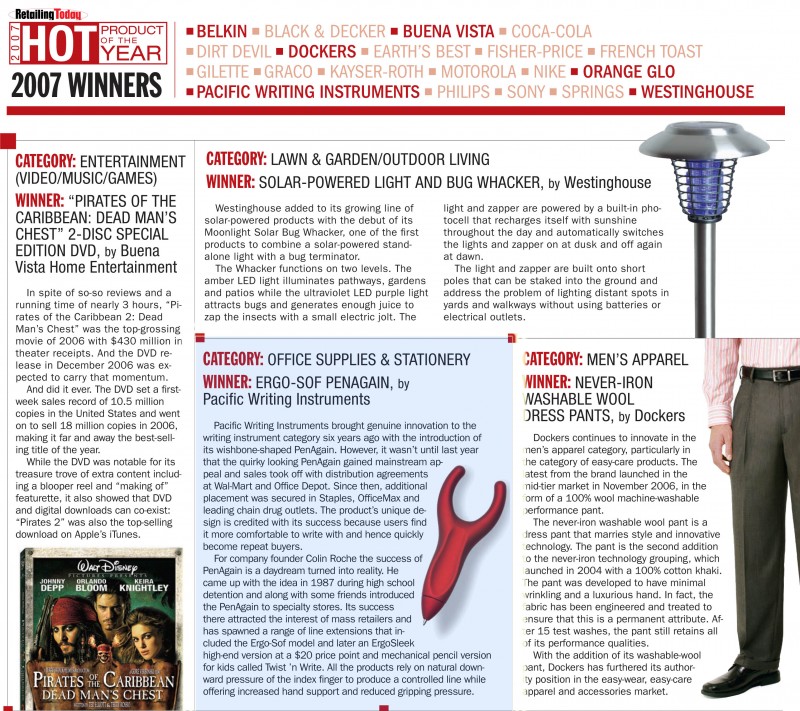 Pacific Writing Instruments brought genuine innovation to the writing instrument category six years ago with the introduction of the wishbone-shaped PenAgain. However, it wasn’t until last year that the quirky looking PenAgain gained mainstream appeal and sales took off with distribution agreements at Wal-Mart and Office Depot. Since then additional placement was secured in Staples, OfficeMax and leading chain drug chain outlets. The product’s unique design is credited with its success because users it more comfortable to write with and hence quickly become repeat buyers.

For company founder Colin Roche the success of the PenAgain is a daydream turned into reality. He came up with the idea in 1987 during high school detention and along with some friends introduced the PenAgain to specialty stores. Its success there attracted the interest of mass retailers and has spawned a range of line extensions that include the ErgoSof model and later an ErgoSleek high end version at a $20 price point and mechanical pencil version for kids called the Twist n Write. All the products rely on the natural downward pressure of the index finger to produce a controlled line while offering increased hand support and reduced gripping pressure.

NOTE: This article was written in 2007. Since then the marketing focus has shifted away from big box stores and back towards the niche specialty stores that cater to the people that NEED the PenAgain (those having difficulty writing, kids learning to write and kids with special needs).

View all posts by PenAgain →

Are you a stick or a rocket?